The symbols on the Black Rose pin include: the Iron Cross of Valor to mark a soldier's grave,
Battle Standard the soldier's rallied around in battle,
Recumbent Rose in remembrance of our ancestors and their part in the events of the CSA,
Rosebud for the next generation to lovingly pass along our history too. 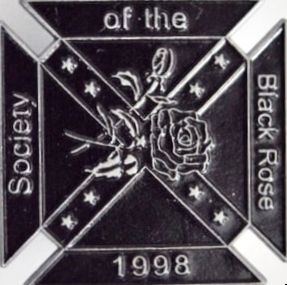 A 3 year project resulting in the symbol below to adorn a grave marker to honor deceased members
or special projects was created.   In 2009 it was voted that all states and members were asked to create a
design to represent the Order of Confederate Rose that would be voted on in the next Confederation meeting.
2010 in the presidents' meeting the design below was voted on, and in 2011 the bronze medallion was unveiled!